The brain deteriorates over time as a result of corticobasal degeneration. Here are several alarming signs that you shouldn’t disregard.

Movement, memory, speech, and coordination issues can result from corticobasal degeneration, sometimes referred to as corticobasal syndrome, which causes the brain to degrade. The accumulation of the tau protein, which also occurs in Alzheimer’s disease, causes the degenerative disease to begin. In addition to other symptoms, a person with this condition will exhibit dementia, slow and slurred speech, balance problems, muscle rigidity, difficulties controlling a limb on one side of the body, and difficulty swallowing.
“It is a rare condition in which a person’s brain narrows in some places and eventually loses nerve cells. The brain deteriorates over time, harming and destroying your neurons, due to the accumulation of a misfolded protein called Tau. It may be brought on by ageing and environmental changes in some persons “the Marengo QRG Hospital in Faridabad’s Senior Consultant Neurology, Dr. Najeeb Ur Rehman. 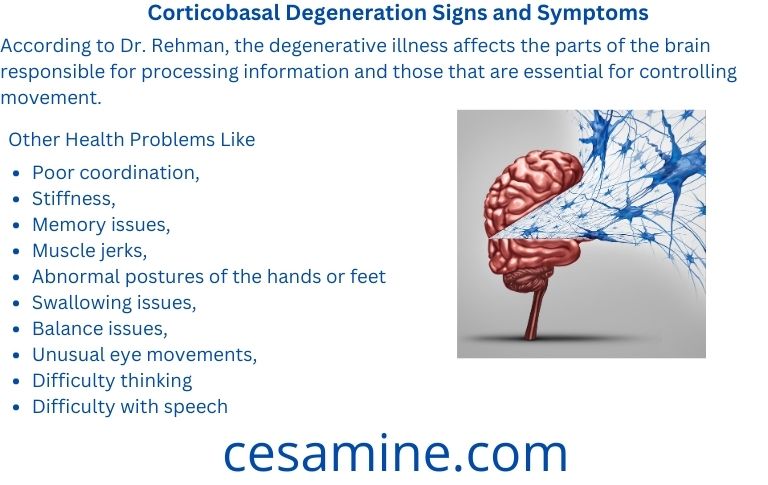 According to Dr. Rehman, the degenerative illness affects the parts of the brain responsible for processing information and those that are essential for controlling movement.

“One or both sides of the body may have trouble moving due to this deteriorating disease.

The person who has this condition may also experience other health problems like poor coordination, stiffness, memory issues, muscle jerks, abnormal postures of the hands or feet (such as the hands forming a fist), swallowing issues, balance issues, unusual eye movements, difficulty thinking, and difficulty with speech (slow and halting speech), among others “Speaking about the symptoms, the expert states.
Finding the cause of corticobasal degeneration.
“The patient is advised to have a neurological examination, blood tests, imaging tests such a CT or MRI, Electroencephalography (EEG), and lab testing in order to diagnose this disorder. Neuropsychological testing is used to evaluate memory and brain function “Dr. Rehman explains.

According to Dr. Rehman, there is no medication that can stop or stop the advancement of corticobasal degeneration.

“However, some medications may be able to keep the symptoms under control. Baclofen and levodopa are suggested treatments for muscular rigidity. Muscle spasms can be treated with clonazepam. Injections of Botox can reduce suffering. Galantamine, donepezil, and rivastigmine are cholinesterase inhibitors that can help with memory issues. To treat the symptoms, doctors may also recommend therapies like physical therapy, occupational therapy, and speech therapy “He claims.