Does A Large Waistline Mean You Are At Risk Of Diabetes And Heart Disease?

Is having a wide waistline a sign of diabetes and heart disease risk?

“You have underlying insulin resistance, which is indicated by the increased circumference.” According to Dr. Subhash Kumar Wangnoo, Senior Consultant, Endocrinologist and Diabetologist, Indraprastha Apollo Hospital, New Delhi, “We continually inform patients that the process of diabetes starts at least a decade before they get recognised and the pancreas is overworked with weight.”

In addition to being an aesthetic issue, central obesity, commonly known as a wide waistline, is a potent indicator of several serious health disorders like diabetes and heart disease. Here are some things you should be aware of regarding how a wide waistline is a reliable predictor of future health concerns.

Does having a wide waistline increase your risk of developing diabetes and heart disease?

The danger of getting diabetes, high cholesterol, high blood pressure, and heart disease increases if the waist circumference exceeds these limits, according to Dr. Subhash Kumar Wangnoo, Senior Consultant, Endocrinologist and Diabetologist at Indraprastha Apollo Hospital. The larger circumference indicates that you have insulin resistance at the fundamental level. 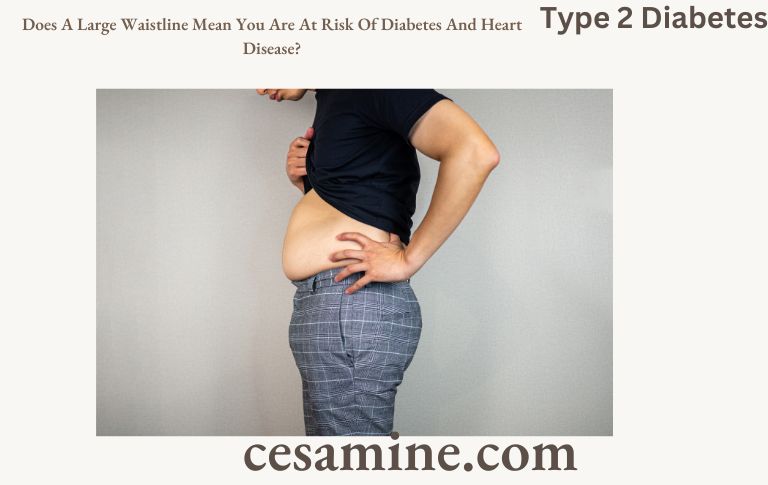 “The additional abdominal fat is detrimental to metabolism because it serves as a storage area for a variety of cytokines, which are various substances. Adipocytokines are one of these and they lead to insulin resistance.

Adiponectin, for instance, is a different molecule that enhances insulin sensitivity and prevents diabetes, but when too much fat accumulates around the waist, the levels of adiponectin drop. Insulin resistance follows, which is the first sign of diabetes, the doctor continues.

Insulin resistance is associated with obesity.

Insulin resistance, according to Dr. Wangnoo, is essentially present from birth and becomes apparent later on when the patient puts on weight, leads a sedentary lifestyle, or has a family history of diabetes. The genes that control insulin sensitivity become aberrant when the patient is obese, which results in an insulin resistance state. “We continually inform patients that diabetes develops at least ten years before they are discovered. The body usually makes up for insulin resistance ten years before it manifests itself by producing additional insulin from the pancreas to maintain normal blood sugar levels. The pancreas, which normally creates more insulin, is unable to do so beyond eight to ten years because the body has a detecting mechanism that causes it to make more insulin. Patients begin to acquire diabetes at that point due to an insulin deficit, he continues.

Dr. Wangnoo claims that insulin resistance not only leads to diabetes but also alters the metabolism of cholesterol, raising levels of bad cholesterol.

Does PCOS contribute to an increase in belly fat?

According to him, Type 2 diabetes is more likely to affect women with PCOS because insulin resistance makes it difficult for them to utilise the insulin they produce.

How do you shrink the size of your waist?

Children who are obese experience three effects, according to Dr. Ashutosh Marwah, Director of Paediatric Cardiology at Fortis Escorts Heart Institute. One is psychological, and this fear of standing out encourages stress eating, which in turn causes early onset diabetes, hypertension, and hyperlipidemia in adults. Precocious puberty is another significant issue.

Preventive action is crucial. Continue nursing for a further four to six months. When a child becomes a toddler, the family must be more cautious when feeding the youngster. They should refrain from offering or feeding children overly processed foods, noodles, fast food, aerated drinks, and any indulgence that could cause an overweight or obese youngster.

Encourage kids to participate in outdoor activities and develop their athleticism by participating in sports of any kind. Limit children’s screen time. To prevent childhood obesity and weight increase, the family should practise healthy snacking. Instead of choosing fried foods, they should choose roasted ones, he continues.