Although our immune system plays a crucial role in keeping us safe from infection and harm, when immune responses are overly strong, they can cause harmful inflammation, which manifests in diseases like rheumatoid arthritis and psoriasis.

The understanding of how inflammation is managed has significantly advanced thanks to research from Trinity College Dublin. They have demonstrated that a key immunological alarm protein that was previously believed to decrease the immune response actually has the opposite impact.

The study’s conclusions, which were printed in the journal Science Immunology. 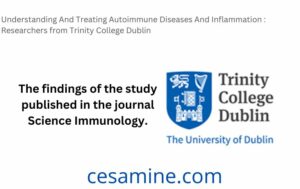 Numerous potential effects of their study exist, particularly with regard to understanding and treating autoimmune diseases and inflammation.

Although our immune system plays a crucial role in keeping us safe from infection and harm, when immune responses are overly strong, they can cause harmful inflammation, which manifests in diseases like rheumatoid arthritis and psoriasis. Our bodies’ “alarm proteins” (interleukins), which amplify our defences against infection and injury by turning on various immune system components, cause inflammation.

Major advances in the treatment of many immunological disorders have been made as a result of a better understanding of how and why alarm proteins are created and how they activate our immune system.

Interleukin-37 was previously thought to act as a “off switch” for the immune system, but now researchers at the Smurfit Institute of Genetics at Trinity College Dublin, led by Seamus Martin, the Smurfit Professor of Genetics, have discovered that this interleukin actually has an unexpected function as an immune-activating molecule.

Interleukins are essential for controlling how our immune systems react to bacterial and fungal diseases, according to Professor Martin. Interleukin-37, however, has long been a mystery because it is absent from animals like mice. The fact that so much of what we know about the human immune system was initially found in model species with similar biological make-ups to our own has created a significant challenge to understanding what it accomplishes.

Interleukin-37 was previously assumed to have immune-suppressive properties, but how exactly it turned off inflammation was highly contested. The Trinity researchers have since reported that Interleukin-37 has strong pro-inflammatory action when triggered properly.

“This pro-inflammatory impact was totally surprising,” Professor Martin continued. Our research demonstrates that the protein interacts to a skin interleukin receptor known to be crucial in the development of psoriasis. This boosts the total number of immunological alarm molecules that signal via this specific interleukin receptor to four, which heightens the suspense of the narrative.

The reason why so many interleukins bind to the same receptor is unknown, but if we had to guess, it might be that this receptor performs a crucial sentinel function in our skin and that just one alarm protein might not be sufficient to react to the various infectious agents that our skin comes into contact with. In many ways, our skin serves as the first line of defence in our immune systems because it is the main barrier between our bodies and the outside environment that germs must get through in order to enter our bodies.

As a result, it’s possible that Interleukin-37 and other immunological alarm proteins evolved into distinctive variations on the same theme that allow our bodies to detect various types of infection by becoming triggered by enzymes specific to each infectious agent.