In Germany, a widespread respiratory virus is present and particularly devastating on the young. Hospitals for children are under a great deal of stress. However, this urgent scenario was foreseen and is the outcome of ongoing issues.

A recently revived baby is brought into a children’s hospital that is overflowing with patients. A 3-year-old who requires an urgent heart procedure must wait a third day in a row for this to occur.

Then there is the case of the toddler who was moved 150 kilometres (93 miles) one night from Hannover to Magdeburg because there were no more beds in any of the 21 hospitals in the area. Numerous kids spend the entire night gasping and wheezing in the emergency room waiting area before being sent home. individuals who ought to be in the critical care unit but are instead receiving care in regular wards. 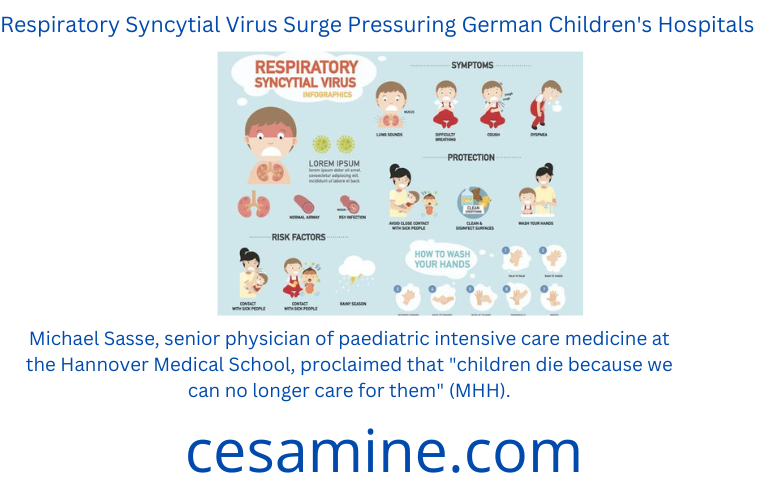 Michael Sasse, senior physician of paediatric intensive care medicine at the Hannover Medical School, proclaimed that “children die because we can no longer care for them” (MHH). Strong words for a strong situation.

This threat looms ominously close to reality for Mehrak Yoosefi. At the Charite hospital in Berlin, the paediatrician said: “Currently, all of the paediatric healthcare services are open around-the-clock. We are at the limit of our ability to provide care. Every effort must be made to prevent any child deaths during this period.”

RSV Most Dangerous For The Youngest

The peak cold virus season is right now, in December in Germany. Germany’s public health organisation, the Robert Koch Institute, reports that about one in ten citizens, or 9 million people, are currently afflicted with a respiratory disease.

Children in school between the ages of 5 and 14 are particularly susceptible to the infections. Most adults and older children often only get a mild case of the common and contagious Respiratory Syncytial Virus (RSV), but newborns and small children are more vulnerable. It can cause serious disease since it affects the respiratory system, and some patients will require artificial breathing.

The COVID-19 pandemic has a significant impact on the fact that the virus is now wreaking havoc in Germany. Young children were less likely to contract RSV in previous years due to mask-wearing requirements and lockdowns, but infections are again catching up.

For Germany’s already severely overburdened healthcare system, this has disastrous repercussions. Yoosefi, who keeps herself healthy by donning a mask, stated: “Sometimes there are no beds available, so we are unable to admit these kids to the hospital. There are situations when we are unable to provide children breathing assistance due to a lack of tools to check their oxygen saturation. These kids could be suffering breathing problems. Children are currently being transferred out of intensive care or discharged earlier than they would typically do.”

Half of the hospitals in Germany have had to turn away children for paediatric intensive care, according to a poll by the German Interdisciplinary Association for Intensive Care and Emergency Medicine (DIVI). 43 of the 110 paediatric hospitals lacked any beds in their general wards.

Additionally, even though there are enough paediatric intensive care beds, only around 40% of them can be used because of a staffing shortage. Yoosefi, a paediatrician from Berlin’s Charite Teaching Hospital, declared, “We are all completely exhausted. “There are not enough employees to handle this massive influx.”

It’s not like the German children’s hospitals didn’t know what they were going to face this winter. With the Initiative Berliner Kinderkliniken, a group of doctors from clinics all around Berlin, Mehrak Yoosefi met legislators in January. There was silence. In September, the organisation wrote a second open letter and addressed it to federal Health Minister Karl Lauterbach of the center-left Social Democrats (SPD) and top Berlin health official Ulrike Gote of the Greens. “We anticipated this epidemic of disease. Naturally, this has led to complete dismay as it has turned out to be considerably worse than we had anticipated.”

Politicians did respond, albeit slowly and after the winter had already begun. The suffering children’s hospitals will receive greater funding thanks to a set of health laws that were approved by the Bundestag, the federal parliament of Germany. Additionally, €120 million will be allocated to support maternity facilities in addition to an additional €300 million ($314 million) in 2023 and 2024. But what truly infuriates Yoosefi is Lauterbach’s suggestion to tackle the current crisis: to transfer employees from other wards to work in the children’s departments. Lauterbach is a certified epidemiologist.

The drawbacks of generic training

The German Ministry of Family Affairs proclaimed with pride in January 2020 that becoming a licenced nurse was evolving and becoming more appealing. The so-called generalist nursing training, which allows employees to work across all age groups and areas of care, has some drawbacks, the children’s hospitals have painfully learned over three years later.

The head of the paediatric division at the University Hospital of Cologne and the president of the German Society of Pediatrics and Adolescent Medicine, Professor Jörg Dötsch, foresee a grave nursing shortage.

“It was agreed a few years ago to harmonise German nursing education with practises across Europe. And it was anticipated that some of these individuals would later focus on paediatric nursing. The issue is that there aren’t enough of them. The fact that these options for specialisation are not available at all in some states may be even more important “added he.

The funding mechanism is not appropriate for child care

Children’s hospitals in Germany suffer from the structure of the country’s health budget. Hospital services are now compensated at a set cost based on the diagnosis or procedure rather than the time and effort required to execute it as of 2004. It normally just takes a few minutes to draw blood from an adult, but it can take up to 30 minutes to draw blood from a young child and explain everything to the child’s parents. Pediatrics director Dötsch said, “You need a lot of energy and time since children and young adults — and their parents — have dramatically different care demands.”