The World Is Addicted To Chicken. So Is The Bird Flu Virus

The bird flu pandemic wreaking havoc on poultry flocks throughout the world is now the worst on record, driving up egg prices, jeopardising free-range chicken, and posing long-term risks to animal health.

The avian flu season often starts in October as migratory birds leave chilly regions of the Northern Hemisphere and expel contaminated droppings or saliva. However, this year’s cases spread quickly throughout the warmer months, reactivating the virus and forcing widespread culling.

According to the World Organisation for Animal Health, poultry losses since October have increased by about 70% compared to the same period last year, totaling 16.1 million as of December 1. Prior to that, 138 million more birds were lost in the 12 months leading up to September than in the previous five years put together, according to WOAH. 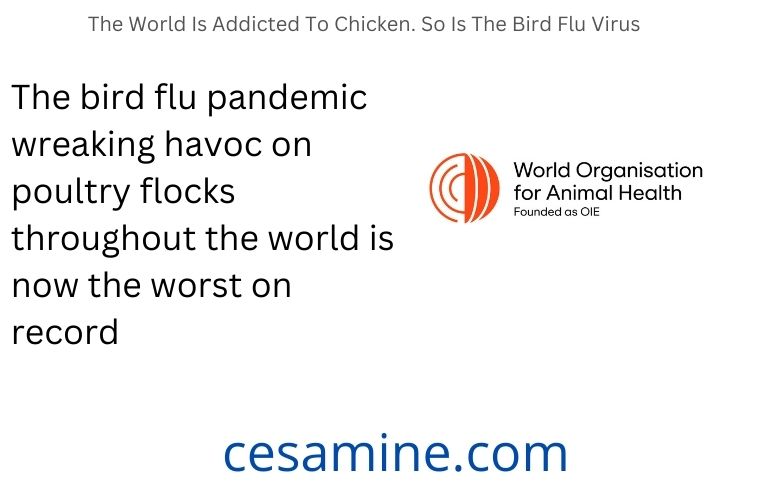 It has given rise to worries about holiday traditions like roast turkey dinners for Thanksgiving and Christmas in the US, the UK, and other countries. However, because poultry is a staple of diets around the world, culls are reducing supply of goods like eggs and foie gras and escalating the food inflation that has already hurt consumer budgets this year. Farmers are raising the alarm since vaccines may not be available for years.

Mark Gorton, managing director of Traditional Norfolk Poultry in eastern England, which has lost 15% of its flocks since September, said: “This is much, much worse than it’s ever been and I think it’s caught everybody by surprise.”

“This is a global issue, not simply one that affects the UK. We must resolve the situation.To meet the demand for affordable chicken, which has risen since 1999, around 35 billion chickens are kept in farms around the world.

The cost-of-living problem this year has increased sales as people choose cheaper alternatives to beef.

The disease spread faster as farmers struggled with increased feed and energy costs. According to Nan-Dirk Mulder, an animal-protein specialist at Rabobank, with growth under pressure, global poultry output would likely increase by approximately 1% this year and the following year, falling short of historical norms of 2.5%.

Farm birds are frequently killed by bird flu, which can spread to tractors or feed. As soon as one bird becomes ill, flocks are destroyed. Since they are killed after roughly six weeks of growth, chickens raised for meat may be less susceptible to infection, but larger, older birds and hens that lay eggs have been badly impacted.

The result has been a year-over-year increase in retail egg prices in the US of double that of oven-ready chicken in the UK.

It affects the entire world. As local farmers are forced to make cuts due to feed prices, Malaysia is importing eggs. The past two winters, millions of ducks on French farms perished from the virus. The Minnesota-based Hormel Foods Corp., which farms turkeys for roasts and lunchmeat, anticipates a decline in production at least in the first few months of 2019. Importers frequently limit purchases made from contaminated areas.

Birthe Steenberg, secretary general of the European poultry organisation AVEC, described it as “one enormous concern on top of all the others.”

According to Gregorio Torres, director of the WOAH science department, instances haven’t disappeared over the summer since 2021 as they usually do. Now that wild birds are chronically infected, the health of poultry they come into contact with is compromised, and the hazards to endangered animals are increased.

According to Torres, scientists are working to determine the cause. The virus changes swiftly, possibly improving its ability to transmit disease. The organisation is also researching the impact of climate change as temperatures rise and migration paths alter.

However, the infection is not new, and there have been previous warnings. Since the middle of the 20th century, highly virulent avian influenza has been detected on most continents. Widespread losses were sustained by a wave that originated in Asia in 2003, but they paled in comparison to the toll from 2021–22.

Less than 10 people have been infected by the dominant H5N1 strain since 2018, according to the World Health Organization, despite the fact that it may transfer to humans.

The extent of previous outbreaks indicates that conventional biosecurity measures, such as restricting access to barns, washing cars, and prompt culling, are “not enough anymore,” according to Steenberg. Controlling the movement of wild birds is a challenging task.

In 2022 and 2023, avian influenza will be unlike it has ever been, according to John Brunnquell, chief executive of Egg Innovations, a significant US producer of free-range eggs.

Not all areas have suffered significant damage. While Japan discovered its first-ever case and approximately two dozen farms were infected in South Korea, which had egg shortages during previous outbreaks, infections in Asia have been rather mild this time around.

Brazil, the leading chicken exporter in the world, is likewise flu-free, but recent occurrences in the adjacent countries of Ecuador and Colombia have prompted actions to stop the virus from crossing international borders.

Customers are becoming more selective, frequently choosing free-range items from birds that are permitted to roam freely rather than being kept indoors. While it’s better for the animals, there is a greater chance of coming into contact with diseased wildlife.

The virus has therefore harmed numerous outdoor growers. All poultry in the UK was shut down in November, and 40% of the free-range turkeys grown for Christmas feasts in the UK perished. There have been egg shortages in the nation.

According to Gorton, whose business can no longer fulfil all of its Christmas orders, the disease may spread quickly and flocks can sometimes be wiped out four to five days after the first symptoms appear. After an illness, farms need to be thoroughly cleaned and may be abandoned for up to six months. The UK government only provides compensation for birds that are still healthy when authorities arrive, thus rapid culling can also have a financial impact.

Despite this, infections continue, and indoor farms are still at risk. Farmers are looking for novel solutions, such as brightly glowing lights to scare away passing birds or screens to protect outdoor livestock.

European vaccine studies are now underway, according to AVEC’s Steenberg, who said it may take at least two years for a vaccine to be available on the market. Any vaccination would need to be adjusted as strains change and be subject to international standards.

Although the risks are increasing at an equally rapid rate, Mulder noted, high prices are now supporting chicken farmers. The demand is there, but there isn’t enough supply, he said. “The market is incredibly unpredictable.”

According to Brunnquell of Egg Innovations, avian flu infections previously happened only occasionally. “The flu arrived and then vanished. It is now staying.